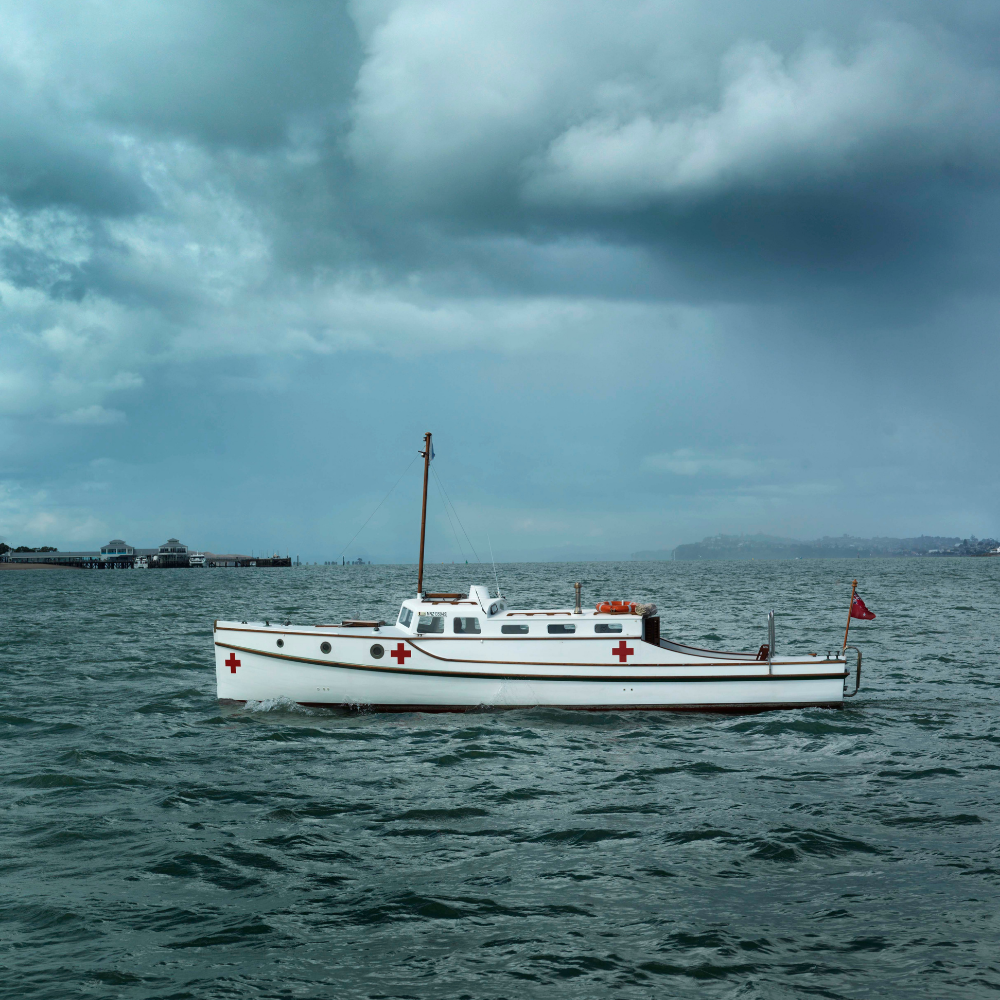 Nautilus is one of the four vessels in the museum’s working fleet. The launch tried to do good in the First World War, journeying many miles from its moorings on Christchurch’s Ōtākaro Avon river. It had arrived there in 1914, fresh from the Auckland shipyard of Collings & Bell. ‘This is a magnificent vessel,’ the Star reported: made entirely of kauri, 32 feet long by 8 feet in the beam, it dwarfed the 30 other vessels moored at the New Brighton Power Boat Club.

Nautilus was owned by Fred Horace Edwin Chester, an electrical engineer at Canterbury Frozen Meat Company. After news of the slaughter at Gallipoli spread, Chester lent Nautilus to the government for use on the hospital ship Marama, for ship to shore transfers in anchorages without wharves. Marama, a former passenger steamer, had been fitted with 600 beds, an operating theatre, a mortuary, and a padded room for ‘mental’ patients, a category that could extend to conscientious objectors. Nautilus was also revamped, and given a new livery designed to deter enemy fire—painted white with a green band and three red crosses. Additionally, the launch displayed a Red Cross flag at the bow, the New Zealand ensign aft.

With Nautilus and another launch stowed aboard, Marama sailed on it first commission late in 1915, just after the Allied evacuation from Gallipoli. The following year the ship made 11 dashes across the heavily mined English Channel during the Somme offensive, in two months carrying 10,800 wounded Allied troops and German POWs direct from the trenches. For the remainder of the war Marama, along with sister ship Maheno, shuttled injured soldiers from England to New Zealand.

By 1918 Nautilus’s life on the high seas was over, as was the war. The launch was back in Christchurch, hardly in disgrace but not triumphant either. Its performance was underwhelming from the start: during Marama’s first voyage, both of its launches broke down in the Sri Lankan port of Colombo; a week later in the Suez Canal engineers were still tinkering. Maheno’s launches were just as troublesome, the chief officer describing one as ‘useless’, and asking for it to be swapped out for a lifeboat, which could carry 45 people instead of 30, and save rope, benzine, and £10 a month in wages besides. In truth, the motorboats were square pegs in round holes: they were sheltered-water launches, writes Boating New Zealand’s Harold Kidd, with vulnerable ignition systems, rendering them ‘incapable of functioning efficiently after being exposed on davits across the wide oceans of the world and through the tropics, again and again’.

In its natural peaceable habitat Nautilus was soon bought by another member of the Power Boat Club, a baker called Harry Hawker, who used it to ferry picnickers from New Brighton up the Ōtākaro. Nautilus was later used for excursions on Lyttelton harbour, and as a pleasure craft, until in 2011 the Christchurch businessman Allan Williams gave the by-then modified launch to the museum. Over five years museum volunteers and staff set to its restoration. Embroidered stories of Nautilus’s heroic past still surface—namely that it evacuated maimed troops from Gallipoli, and copped bullets in the course of the mercy mission. Not so on both counts.

*Have a story about Nautilus? We’d love to hear it.