The museum’s collection of model canoes showcases the naval architecture and seafaring talent found throughout Te Moana-nui-a-Kiwa the Pacific Ocean. The designs are singular. One references a canoe used for ceremonial exchange in Papua New Guinea; another a vessel that ran down sharks in Tokelau; another an outrigger which hived between and around Kiribati’s many atolls and its 3.5-million-square-kilometre archipelago. Most models were made for tourists, suitable for careful transport home in a suitcase; a larger one was built for the museum, as an exemplar of Fijian/Sāmoan/Tongan wizardry.

Papua New Guinea has a rich tradition of canoe construction and design. The above model with its three frou-frou claw sails looks to be a mash-up for the tourist market. One of the country’s outriggers was specifically used in the Kula cycle, a ceremonial exchange and trade system that linked many islands in the Massim region off the south-eastern tip of New Guinea. The Kula canoes, or masawa, were much more elaborate in some ways than the example shown here: carved by experts, they were repainted and redecorated with shells on each major voyage. They had names such as Flying Fish. In the late 1800s the Trobriand Islands alone had roughly 60 masawa. 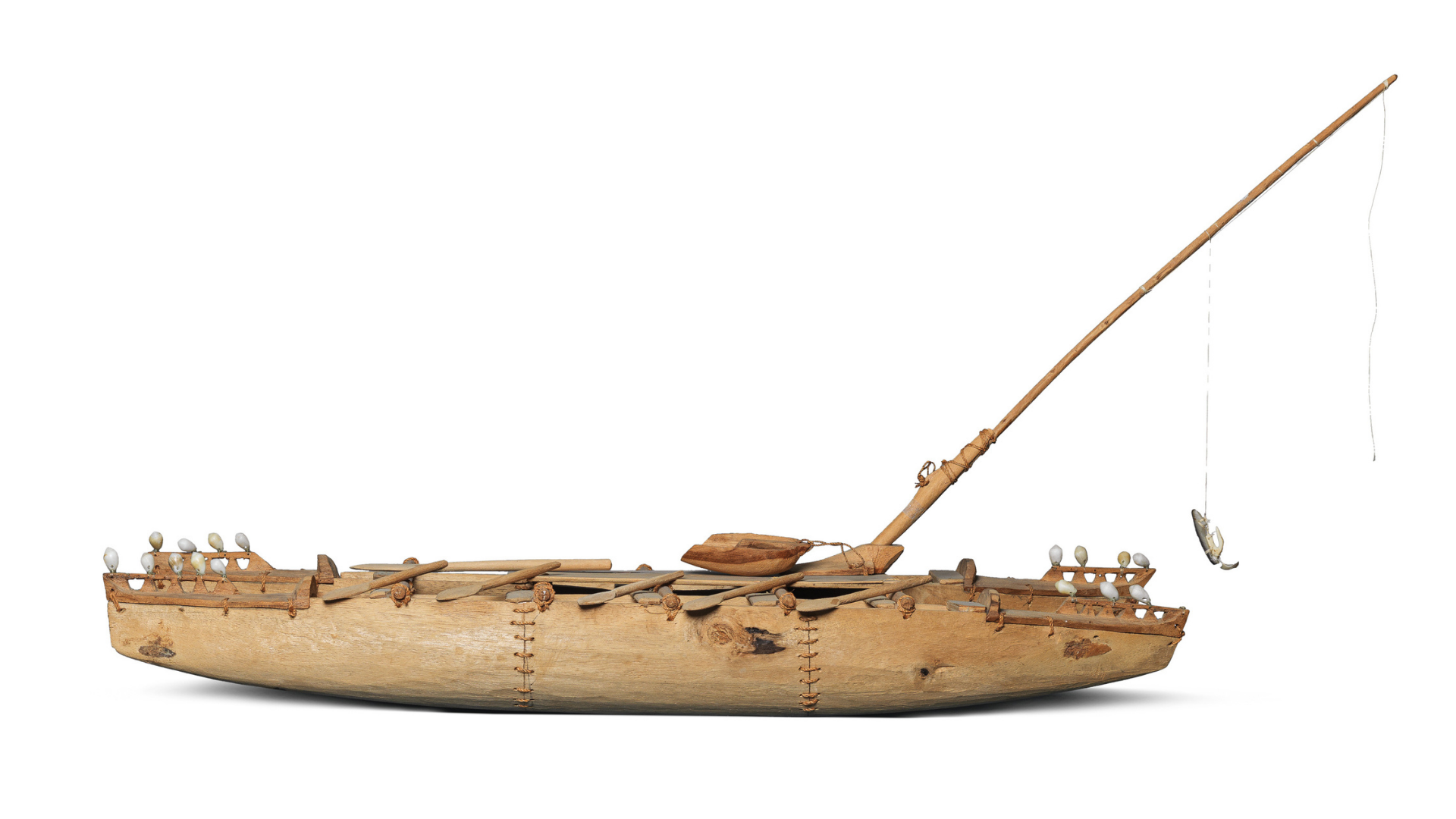 This is a lualua, a double-hulled fishing canoe of Tokelau, complete with six foe or paddles, a bailer, and a fishing pole. In the way of the real thing, each of its two hulls is made of three sections, lashed together vertically with natural fibres. Cowrie shells decorate the stern and bow. The pole, with a serious hook attached, slots into a mount on the deck. The intended prey was bonito, tuna, and sharks. A model of a wa-ririk, an outrigger of the central Pacific Ocean country of Kiribati. Modernised takes on the design are still in use for fishing beyond the reef and for coastal transport. Traditional wa-ririk came in at 15 to 24 feet long, 2 to 3 feet deep, and were 15 to 24 inches in the beam. The hull was carvel-built, planks lashed together by sennit. The float was attached by three booms, the sail woven from pandanus leaf. The requisite skills for building wa-ririk still exist—one was recently built by a community at the edge of the lagoon in Tarawa, one of Kiribati’s 32 atolls. This model was made by Vincent Corrie in the 1970s. Made by Rikini Akaro in the mid-1980s, this outrigger is based on a design found in Pukapuka, an isolated coral atoll in the northern group of the Cook Islands. The detail and authentic sewn construction of Akaro’s work indicates deep knowledge of Pukapuka vaka, which rate a special mention in the 1936-1938 bible Canoes of Oceania. The atoll’s small outriggers are described as having a fore end that is horizontally conical, and a stern which sheers upward to terminate in a truncate knob. The sides are raised by a deep wash strake sewn on by through-stitches. The two outrigger kiato or booms are attached to the float with figure-of-eight lashing made up of several turns. The float is flat above, curved transversely below. This is the museum’s 7.3-metre-long Fijian drua Sema Makawa, going nowhere in the Hawaiki Gallery. It was built in the early 1990s. Its nineteenth-century antecedents reached 36 metres, carried parties of up to 200, and were referred to as waqa tabu, or sacred canoe.

Drua are the epitome of Pacific naval architectural design and performance. They were technological hybrids, and fast. Unlike other Polynesian vessels they had a Micronesian lateen sail, triangular and ressembling a crab claw. And unlike most Polynesian vessels they shunted back and forth, the bow becoming the stern and vice versa, instead of tacking through the wind.

Sema Makawa was principally built by Joeli Tuimaleya of Fulaga, in the Lau group of islands. There, great fleets of drua were once constructed without metals, and in cross cultural collaborations. The Mataisau hereditary Fijian boatbuilding clans were joined by other hereditary craftsmen from Tonga (the Mataitoga) and Sāmoa (the Lemaki). These experts constructed the vessels in a couple of ways—in the case of smaller iterations they hollowed out logs for the hull; in souped up versions they lashed planks together. The long-range, blue-water vessels were usually seven years in the making, and commanded by chiefs who used them for warfare and trading. By 1900 they had all but disappeared—but not before one observer described seeing 49 of them in Tonga in 1862 ‘come bowling along with their living freight like racehorses’.

Thanks to the Lottery-funded Digitisation Project, these model vaka have been digitised recently and made accessible online.