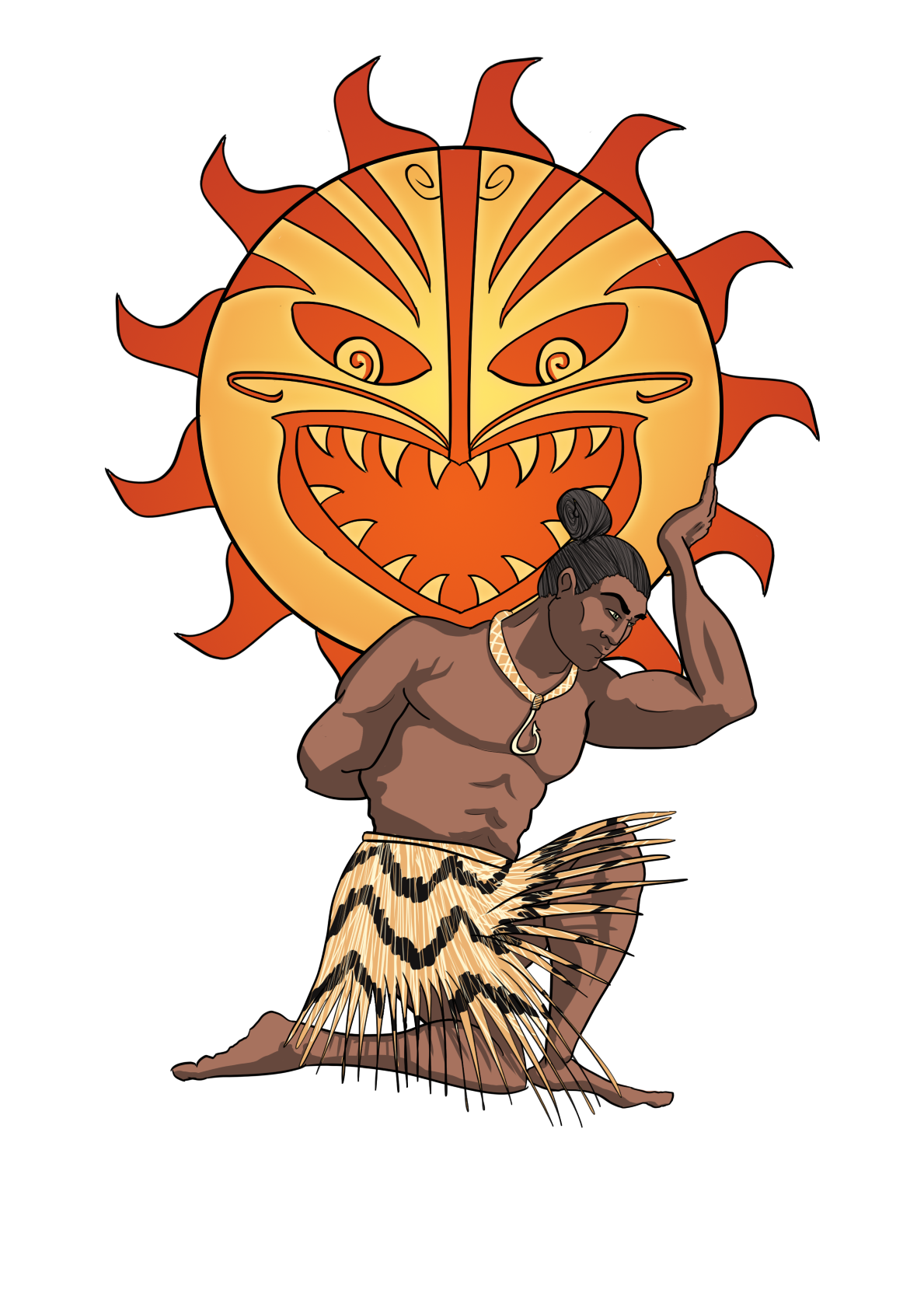 Around the world, in all cultures there are heroes, and here in Aotearoa New Zealand, Maui appears as a hero whose achievements benefit people.  Taranga who, thinking that her last child was still born, wrapped him in her topknot and cast him into the sea.

He was washed ashore, tangled in seaweed and swarmed over by gulls and flies.  Rangi (Tamanui-ki-te-Rangi) his grandfather reached down and took him up into the sky where he was nursed back into life and taught many secrets.

His mother knew no more of him until, much later when he appeared one night among his older brothers as he stood amongst them in line.  In that incident his mother is forced to recognise him as her child.  At first she denies him, saying, “This cannot be.  You’re not my child! Leave!”
Maui moved to the door, muttering as he went, “I’ll go if you say so. Perhaps I am the child of a stranger.  I believe that I was born near the ocean, wrapped in the topknot of my mother and cast into the sea.”

“I was rescued by Rangi, and nurtured by him up in the sky, where I gazed down and watch this house, and listen to your voices.  Indeed I know the names of your children.  There is Maui Mua (Maui the Firstborn) Maui Roto (Maui of the Inside), Maui Taha (Maui to the Side), Maui Waho (Maui to the Outside), and I am Maui Tikitiki a Taranga (Maui the youngest of Taranga)”.

Maui gave his brothers little time to rest before he enlisted their help in a series of great labours, which included snaring the sun, control over fire from its deity, Mahuika, and fishing the land up out of the sea.  He also tricked his great-grandmother Muriranga Whenua to part with her jawbone.

He achieved many great deeds.  He fashioned small jewellery and gardening tools to use over the land.  He invented spears to catch birds. And he made the many types of hooks to catch fish.  When he finished he made the finest lines and nets for fishing.

His brothers did not know that Maui had taken their great grandmothers jawbone and used a part of it to make special hooks. So, one night while the brothers were asleep, Maui crept out and lay hidden in the waka awaiting the predawn. The brothers made their preparations to go out early and leave the youngest brother behind.

The brothers floated the waka.  They silently launched it.  Then they quickly jumped in sailing far out. They paddled out to the fishing grounds, but they had not noticed that Maui was hidden in the bow. They paddled on until they reached the place where they dropped anchor.

It was then that Maui revealed himself.  When they saw him, they planned to return him to shore.  But before they could move, Maui made the sea to rise up until there was no sight of land. Maui said, “You will need me to save this waka.” “Yes, yes, brother.  We need you.  Stay!  Help us!” So they continued paddling until they reached the spot where the waka dropped anchor to fish as  in earlier days.

“Let the anchor out,” Maui Mua instructed. “No,” Maui replied.  “Go out further.  Much further.”  They paddled on until they came to a place where it seemed to be the end of all fishing places. “Go further,” demanded Maui.  “Until we come to the heart of the sea, to Hui Te Ananui-a-Tangaroa, The Home of Tangaroa.”. Then Maui told them to lower the anchor.  “The greatest of all fish lives here.”

Maui then struck his nose sharply until it bled.  He rubbed the blood onto the hook and then cast it out into the sea, the hook made from the jawbone of Muriranga Whenua, his great-grandmother.

The line and the hook went down, down, down ... into the depth of the ocean until it came to rest across the lintel above the window of the great house. Then he tugged on the line until it held fast.  This was the Great House of Tonganui, the son of Tangaroa.

Slowly, oh so slowly out of the depths the house started to rise above the surface.  The sea erupted as the great fish thrashed.  Maui held on keeping the line taught.  The great fish kept rising.  Maui hauled and pulled.  The sea around bubbled and burst as the fish rose above the boiling waves.

He ignored the fearful cries of his brothers, “Let go!  Let go! We will all die!”
“No!” he replied, “We will live.”  Then Maui recited the incantations to settle the fish in its struggle for freedom.

At last, the Great Fish, Te Ikanui-a-Maui lay gasping upon the surface and the canoe stranded.

No sooner had Maui gone out of sight when the brothers with greed in their eyes started trampling and cutting up the still warm fish.  The fish writhed and struggled writhing with pain. And died.

And that is why, the legend tells us why this land is as rugged as it is dissected by mountains and valleys.

The fish shape can still be seen – the mouth is Te Whanga-nui-a-Tara (Wellington) in the south, the tail is Northland, the fins are Taranaki and the East Coast. The heart is Lake Taupo and one of the eyes is Lake Wairarapa.
The fish hook is Cape Kidnappers. The island was named Te Ika-a-Maui = the Fish of Maui and became the North Island of New Zealand. The South Island of New Zealand is thought to be the waka of Maui and Stewart Island the anchor stone.

The story of Black Magic

The story of Black Magic