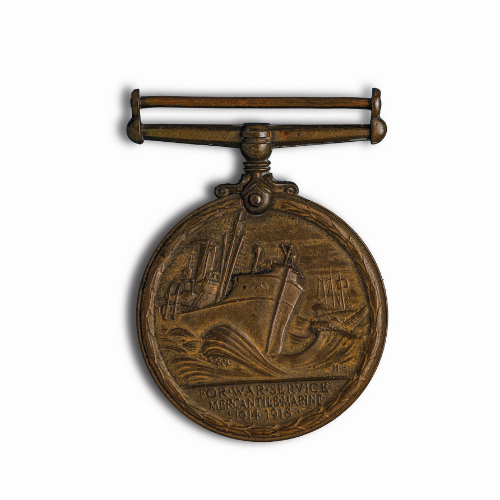 The museum has recently digitised our 80-strong collection of medals, buttons, badges, pins, and ribbons—little decorative items that recognise the achievement of the wearer. One is the Mercantile Marine War Medal awarded to Captain Arthur Henry Davey in 1919 for service at sea during World War One. Davey went on to have a 30-year-career commanding ships for the Union Steam Ship Company of New Zealand, with chutzpah. He was friends to prime ministers but maybe not to broadcasters—the radio personality Aunt Daisy once describing him as ‘that dreadful man Captain Davey’, who could nevertheless ‘handle his ship like an Austin 7’.

Captain Arthur Henry Davey was one of at least 1700 New Zealanders who received this medal ‘For War Service Mercantile Marine 1914-1918’, for voyaging through danger zones during the war. During most of the conflict he was in command of the Union Steam Ship Company’s (USSCo) cargo vessel Katoa, which was under charter to the Admiralty, and under threat in the Indian Ocean and the Persian Gulf because it carried, for example, coal from Westport. An hour after Davey and Katoa first carefully steamed into Bombay in 1917, the passenger ship City of Exeter was mined close to the port.

Davey was a lucky man—the British Empire’s Mercantile Marine, later known as the Merchant Navy, lost 2500 ships and 15,000 seafarers during the war, as it transported troops, their horses, Red Cross equipment, munitions, raw materials, and supplies. An estimated 70 civilian New Zealander seafarers died, some when U-boats sent torpedoes their way.

Despite all this, and despite seafarers in the Mercantile Marine being exempt from military service on the basis of working in an essential industry, they faced animosity, partly argues historian Philip Lascelles because they did not fit with the ANZAC legend of the heroic soldier giving his all for King and Country.

The extent of feeling in 1915 was made clear in a newspaper article: ‘The girls in New Zealand have been of material assistance to the recruiting officers,’ said D.R. Hall, Attorney-General of New South Wales on a visit to Christchurch, where he was told ‘by one of the girls that they were not walking out with any single men at the present time. When I asked why, they told me that all the men who were worth having had either volunteered or were giving up their evenings in training; and those who had not volunteered and were not training were not worth walking out with. These fine girls not only refrain from discouraging the men from doing their duty, but where the men are slow in realising their responsibilities, they show their disapproval, by giving them “white feathers”. In one instance I heard of a band of five girls who went out to a sports meeting and distributed white feathers to likely looking young men.’

It’s unlikely Davey would have paid much attention to women sabre-rattling in the name of the imperialist bloodbath that World War One proved to be. He had considered volunteering for the armed services when war broke out, before the government introduced conscription in 1916, but decided he would be more useful staying put in the Mercantile Marine. Davey was also was an assured man, with a deal of panache.

In 1911, aged 33, he gained his first command, on USSCo’s Kini. When the coastal collier broke its propeller shaft in heavy seas off Cape Farewell on the northern tip of the South Island, the crew dropped both anchors to secure the ship, lowered Davey in a bosun’s chair over the stern and into the water, and waited while he wrapped wire around the propeller blades—a task which took him from 11pm until 3.30am.

In the early 1920s Davey may have been working the war out of his system in Fiji: he was in command of the trader Navua in Suva when he instructed a ship’s boy to weight and drop a large dead pig into the harbour. He then sat on Navua’s poop with a rifle and war-surplus ammunition which he had come by in Sāmoa, and took pot shots at the sharks that rose to the bait.

In the late 1920s he was working the Trans-Tasman Royal Mail Service on Makura, telling one passenger who asked whether she needed to wear a hat for Sunday church services: ‘Madam, I shall be delighted to see you there in whatever apparel you consider suitable and I doubt very much if the Lord is interested in your millinery.’ And in the early 1930s after skippering Monowai on a cruise around New Zealand’s coast, he received a half-decent review from one passenger, the radio personality Aunt Daisy. She referred to him as ‘that dreadful man Captain Davey’, noting that regardless ‘he could handle his ship like an Austin 7’.

In 1936 Davey reached starry heights when given command of Awatea, then the third-fastest merchant ship in the British Empire. He took delivery of the sleek liner form the shipwright’s yard in England, astounding the shipping world by dropping anchor in Wellington harbour at the precise minute he had promised before leaving London.

Davey retired five years later, because of arthritis bought on by exposure to cold saltwater in his sailing-ship days, which dated back to 1894 when, aged 16, he left Dunedin as a ship’s boy on the barque Onyx. At his farewell party it seems likely that the above eight-versed song was sung—it was composed for the occasion by members of the Wellington Master Mariners’ Club. A letter was also read out from Prime Minister Peter Fraser, who mentioned the ‘universal regret’ at news of his friend’s retirement from the sea. During World War One, while Davey was serving on Katoa dodging mines and U-boats, Fraser was serving a 12-month prison sentence for advocating the repeal of the Military Service Act and conscription.

At Davey’s retirement the Bay of Plenty Times also reported that the captain was known on Sydney and Auckland waterfronts as ‘Eight-Ten’: ‘Other skippers when approaching port radioed approximate arrival times. Captain Davey always wirelessed “Schedule”, and that was 8.10 am.’