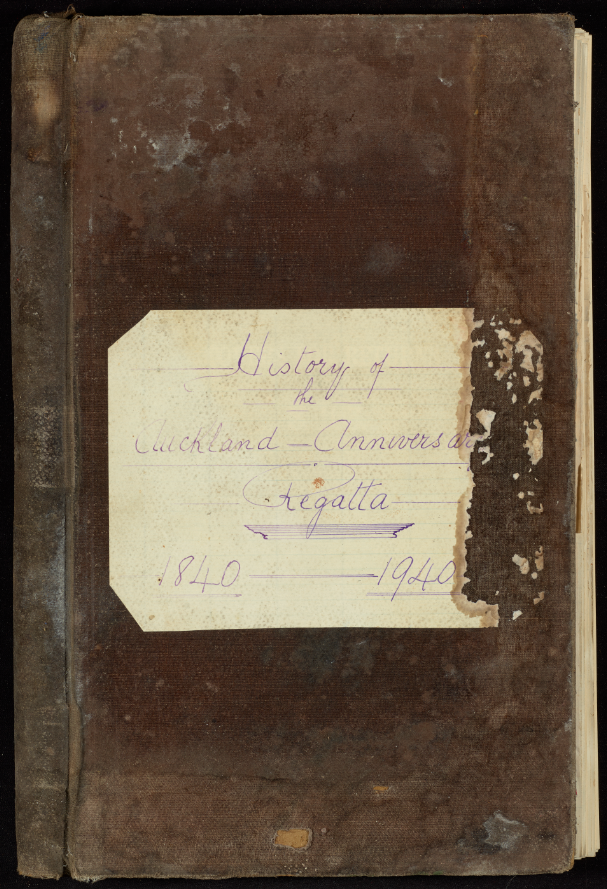 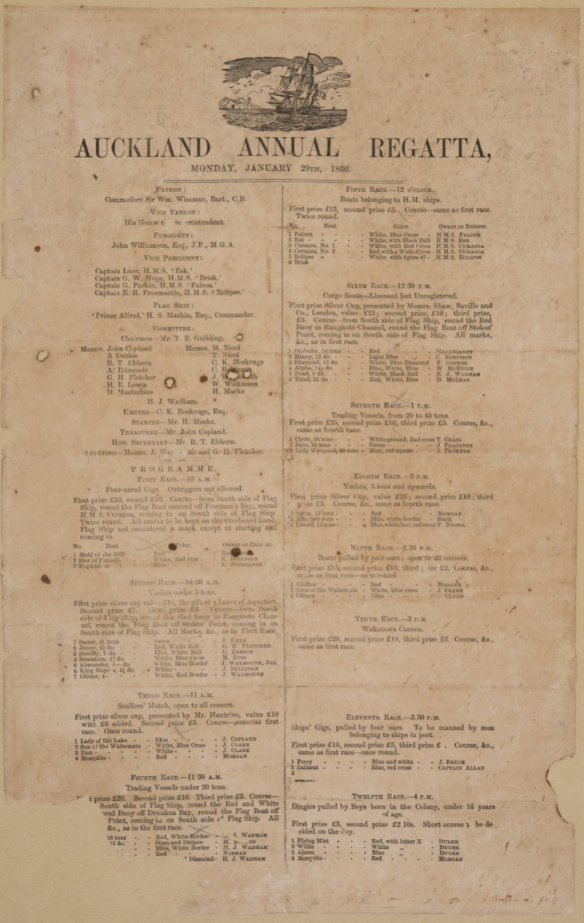 A selection of archives newly available in the museum's Collections Online explores the colourful history of the Auckland Anniversary Regatta, one of the world’s biggest one-day regattas.

A highlight is a history of Auckland’s anniversary regattas from 1840 to 1940, written in part by Captain William Ross. The Scottish-born master mariner was a life member of the Royal New Zealand Yacht Squadron and a veteran trader in the South Pacific. By the time of his death in 1939, he was known as the ‘father of the Regatta’, acknowledging many years of involvement with the Committee. The Auckland Star noted that Ross had attended at least 53 regattas, making him well-placed to write the first-hand account that he sent to Committee Chairman E. B. “Babs” Webster in 1928.

Long before the turn of the century, however, Captain Ross had quite a different reputation with the Regatta Committee. In 1882 he captained the 46 ton CYGNET to an unexpected win in the Small Schooner race, noting in his history: The Cygnet’s performance was so astounding that she was ordered up for examination, but nothing was found but fast lines and good sails. (1)

CYGNET didn’t race in 1883 and was sold to Tongan owners later that year. Ross wrote: If she had been in Auckland it would have been no race, as no boat in N. Z. would have entered against her (2)

By 1884, Ross and his business partners had commissioned a new 56 ton CYGNET from the same boatbuilders, Lane and Brown, with a larger prize pool than that of the Small Schooner race in their sights:…it became known that the owner of the Cygnet was getting another Cygnet built large enough to enter for the champion schooner race, and the owners of other vessels all believed that the new Cygnet would be too fast to allow them a chance of winning, and all (about 10) notified the committee that they would not enter against her. The committee then unsuccessfully tried to exclude her. (3)

Though the builders swore an affidavit that CYGNET was designed as a trading vessel and was thus eligible to race, her design led to protests. An anonymous Master Mariner wrote to the editor of the Auckland Star: Anyone with shipping experience knowing the lines on which Messrs Lane and Brown’s vessel has been built would at once admit that she was not intended for a bona fide cargo carrying vessel. (4)

Ross also kept a diary in which he admitted that the new CYGNET was commissioned with racing in mind:…they had a free hand to cut her as fine as they liked i.e. sacrificing carrying capacity for speed. Almost any shipbuilder can build a fast ship if he can sacrifice carrying capacity for speed. I had two reasons for this, the Regatta prize, especially the champion flag, and a Tongan Chief, one of the most influential and a man who said little as a rule, told me he would wait for my next ship, his people had the money. (5)

Despite the controversy and the last-minute imposition of a handicap, CYGNET took the prize from a field of only three entrants that year, winning £150 as well as a cup, a sextant and the much-desired champion flag. Her sale to Tongan owners took place the following year.

Writing his Regatta history in the 1920s, Ross viewed the race with nostalgia: 1884 was the last year of the champion schooner races. It is now (44 years later) like the Maori canoes and the cutters and scows, a memory of the past that never more will be. Where are the many beautiful schooners and cutters that graced the Auckland Anniversary Regattas? The bones of most of them lie scattered far and wide on the reefs and islands of the great Pacific. (6)

The Auckland Anniversary Regatta Committee has generously donated this original archival material, which was held in trust by the late Committee member Tony Beckett. Additionally, they have provided the library with a full digital copy created by New Zealand Micrographic Services.

In addition to the Collections Online digital access, the collection can be viewed by appointment at the Bill Laxon Maritime Library, which is open Thursdays 10am-4pm.

The Champion Schooner Race cup – also known as the Cygnet Cup – is on display at the museum, along with the Ross Memorial Trophy, both on loan from the Auckland Anniversary Regatta Committee.