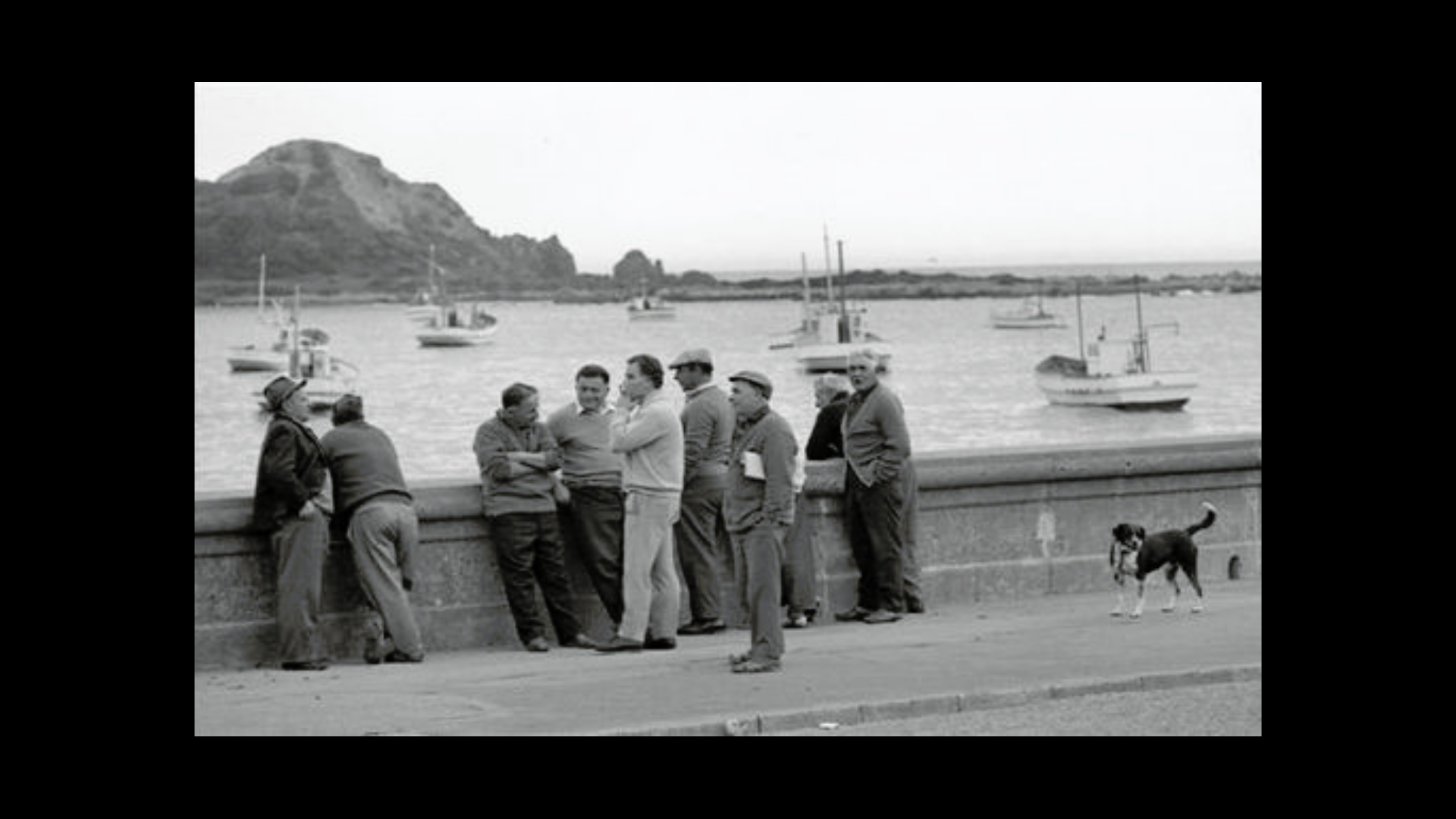 Poet Anne Kennedy officially received a Prime Minister’s Award for Literary Achievement for her work, The Sea Walks into a Wall, a tender and knowing collection which surveys Island Bay, among other terrain. The suburb on Wellington’s southcoast overlooks Raukawa Moana (Cook Strait), one of the most dangerous waters in the world.

Anne Kennedy grew up in Island Bay. She went to mass at St Francis De Sales church with the descendants of Italian fishermen who settled in the neighbourhood in the 1890s. Many came from the Neapolitan commune of Massa Lubrense a.k.a. Terra delle Sirene, the land of the sirens; the mythic creatures bedazzled and warbled sailors and their galleys onto the rocks and to their destruction—unless they stopped their ears with beeswax, or were strapped to the mast like Odysseus.

In the titular poem of The Sea Walks into a Wall Kennedy evokes the suburb’s annual Blessing of the Boats. The ceremony has been held since 1933, when the fishing launch Santina went down in Raukawa Moana, its crew disappearing without trace. ‘They bless the boats from the beach, the beauty and the sinister billowing gown of the priest/who touched your hair in a small room,’ writes Kennedy, who was also living in the suburb when Cylcone Giselle struck on 10 April 1968 with winds of 150 km per hour. TEV Wahine foundered in Wellington harbour in the storm, with the loss of 51 passengers and crew. Italian fishermen were among those who went to the rescue, ‘back and forth like Dunkirk’, she writes.

Years after the Wahine disaster Kennedy read Marguerite Duras, the twentieth-century French novelist and filmmaker with a strong interest in death and eroticism. Duras grew up in French Indochina (present-day Vietnam), watching her family’s crops ruined by innundations from the China Sea. She wrote about it in her 1950 book The Sea Wall, or Un barrage contra le Pacifique. Although now Auckland-based Kennedy has closely monitored a recent stoush over the concrete wall in Island Bay, constructed in the 1930s to repel Raukawa Moana.

‘Like a public bar/the old sea wall was so noir, it was so Marguerite Duras,’ Kennedy rhymes. Locals have always gone for a passegiata along the wall and rested there. Fishermen might have shared confidences about the one that got away there. In 2013 a storm destroyed part of the wall; residents and the council took years to agree an ultimate course of action—to rebuild. For Kennedy it was a Sisyphean exercise; the sea will take the wall again. Some time soon.

“The Sea Walks into a Wall”

The sea used to love the wall.
Now it hates the wall, it hates
on it.

The sea crashes its glass onto the bar.
You watch from afar.

You’d take it all back if you could. Everything.
You’d go down there and you’d.

Island Bay has a new sea wall.
It’s the wall to end all walls.

Everything is in small bits –
sand, salt, the air is glitter. The coast
took a long time to get pretty like this

but the people on the beach – you know them all,
family, friends, frenemies – are stopped in time.
The wall is one huge thing
sitting there.

On the sand: first it is warm then it gets cold.
I am a daughter of the wall. It’s my
post-industrial wall and I stand by it.

All summer, children ran along the wall –
it’s massive like a steam train from nineteenth-century Britain,
a replica of a wall in a seaside town

built 1938 (before the war)
the colony playing catch-up with the motherland.
a great grey road going nowhere.

The wall was: you’re here, everything else is
overseas. It was a great wall.

The wall was your 70s platform shoes reaching down
through the lava, each step a biopsy: salt-fish, the warm sand,
Taputeranga, but sooner or later
hell.

The Tempest blows about on the wind. It’s Island Bay
in reverse. At dusk the Neapolitan fishermen lean on the wall
smoking and looking out to sea.

The children sing at Italian weddings in the new echoey plaster church.
Afterwards on the beach, shadows sprawl on the photos.
The brides try to tame their giant smoky veils
in the wind.

They bless the boats from the beach,
the beauty and the sinister billowing gown of the priest
who touched your hair in a small room.

Below the cliffs, the steampunk wall
waits for the sea. The sea can never break
me.

You love the wall.

You go down there and you.

A short history of storms:

There was the storm that made us reminisce on summer evenings
about the storm. The night the night
screamed through the open window
and hid in the girl’s room.

Curtains flung like a dance class at the barre.
The girl didn’t know these girls.
The lightshade jerked insanely on its string.

She harbours them all night because who’s to know? Everything
is new. At dawn the chimney flips its lid, aghast on the roof.

Rain makes a six-foot Rorschach on the rosy wall
chosen from a roll that a man in white laid out on a trestle
and with his white arm swung on the smell of glue.

The trip across the wet lino to meet the wind
head-on, full of wind (the window frame stripped back the wood
by the roar) the loneliest journey in a life
so far.

All day home and all day wild, the grey sky thick with things.
Your trees, your heart? They are, they aren’t.
The windows growl like a worried dog.
On the beach, the long bodies lie.

The Italian fishermen
in the forte murk
back and forth
like Dunkirk.

Afternoon it’s calm, but the ripped streets.
You go down there and you.
The wall stands but the road is beach. Never forget
safety broken like a soprano’s glass.

A short history of walls:

in Vietnam the French colonials with the strip of land
where nothing grows ‒ it’s so harsh (the salt marsh).

Marguerite Duras: her mother does everything wrong.
She’s a widow, stuck in Saigon.
With money she doesn’t have, she builds a wall to stop
the deep seep of salt. But the wall

is secretly in love with the sea. Year after year
the salt water tickles the sea’s feet.

The family is destitute. Marguerite’s mother
goes mad. Plan B (post-wall) is dangle

Marguerite (aged 15) like bait in front of a rich man.
Local, of the land. He becomes The Lover.

At home in Island Bay, I read Duras, I read Jean Rhys,
Doris Lessing, all the fucked-up settler girls.

Sheltered, where the sea pounds its wounds
I love my wall and I’m beginning

They call the 2013 storm the big storm even though no one died.
The sea wall crumbled like a cake.

You go down there and you

learn the time before the wall
when the soft dunes went with the sway
of the sea, there was nothing in way
of the sea. It nested up, rushed up, rugby-ed up
in the bay.

There was a little fight.
They line up on either side
The people who leaned on the sea wall want a sea wall.
The Council wants no sea wall at all.
They rebuild the wall,
The iwi bides its time.

The sea wants
itself
its own
sea shelf.

The big fight is: the wall
will take you with it in the night,
In the end, just the sea,
the sand, no fight.

You go down there and you.
Old sea wall, new sea wall.

Old sea wall was a statue of a wall.
It was warm and gritty.
The air is rough and blue.

Old sea wall was so blood and guts.
It was tender, it was stone.
It trembled with salt and light,

The wall was the gateway to the sea.
The wall was so grey.
All night and all day
it kept storms
at bay.

On the beach, always an aftermath of a wedding,
froth and a mess of ribbon and glass,
a runway for lost souls returning
a regret.

I love the wall. I pummel the wall. My hands are on
the warm, grey, post-industrial wall.

In the next storm, the sea will take the wall
back into its real-time, moving, shining
thing.

My heart is like a wall
Struck down in a storm.
You didn’t even need that wall
at all.

*Reproduced with thanks to Auckland University Press and Anne Kennedy

**Join Kennedy reading and discussing her work on 16 November, along with the two other recipients of the Prime Minister’s Award for Literary Achievement (fiction writer David Hill, and historian Claudia Orange). Head to Facebook or YouTube. Viewers can submit questions to the panellists during the 6.30-8pm live stream. 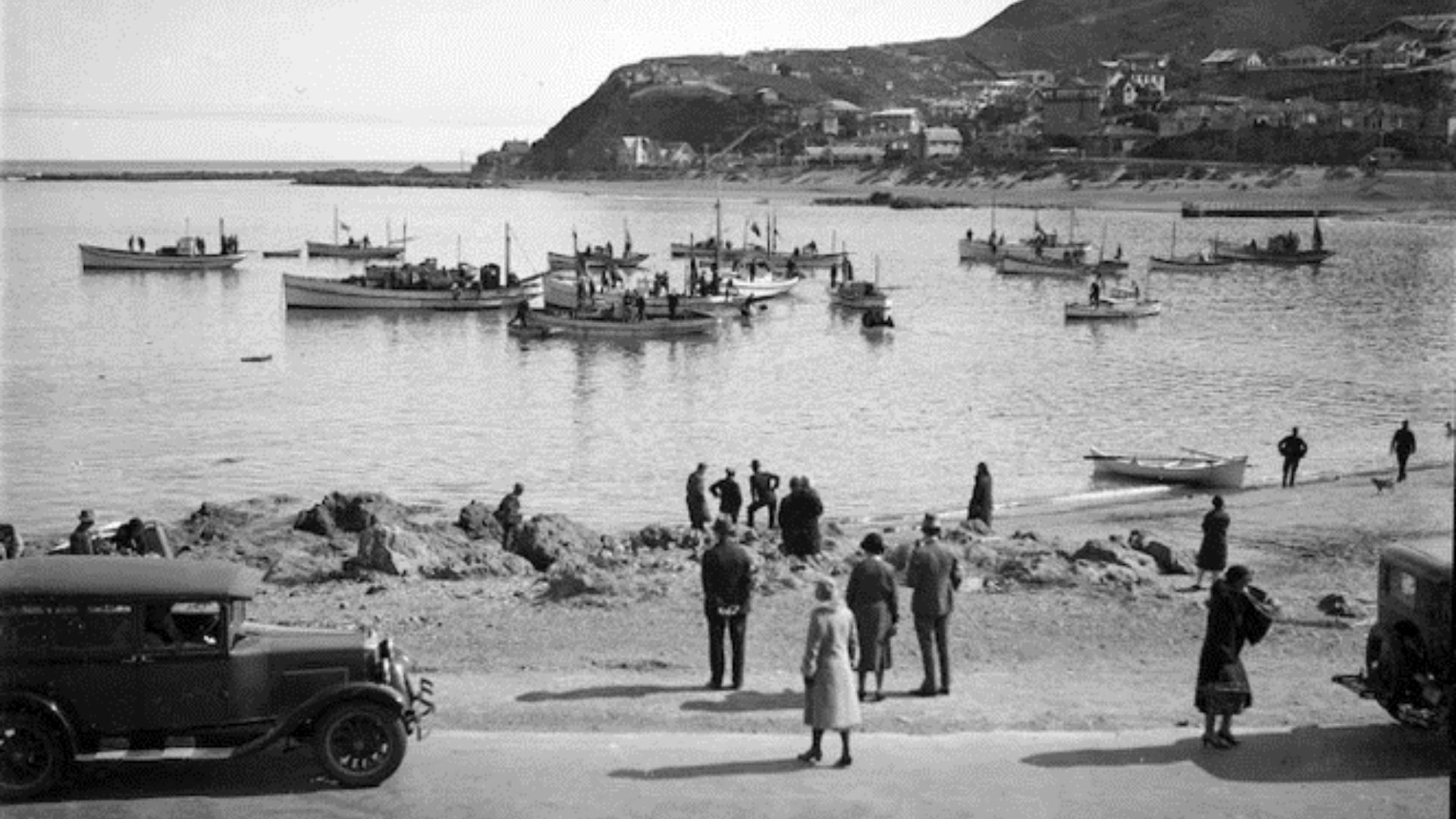 Boats setting out to sea at Island Bay for the funeral of four fishermen after Santina foundered in Raukawa, 1933. Photograph by Sydney Smith. Alexander Turnbull Library, 1/2 -047737-G 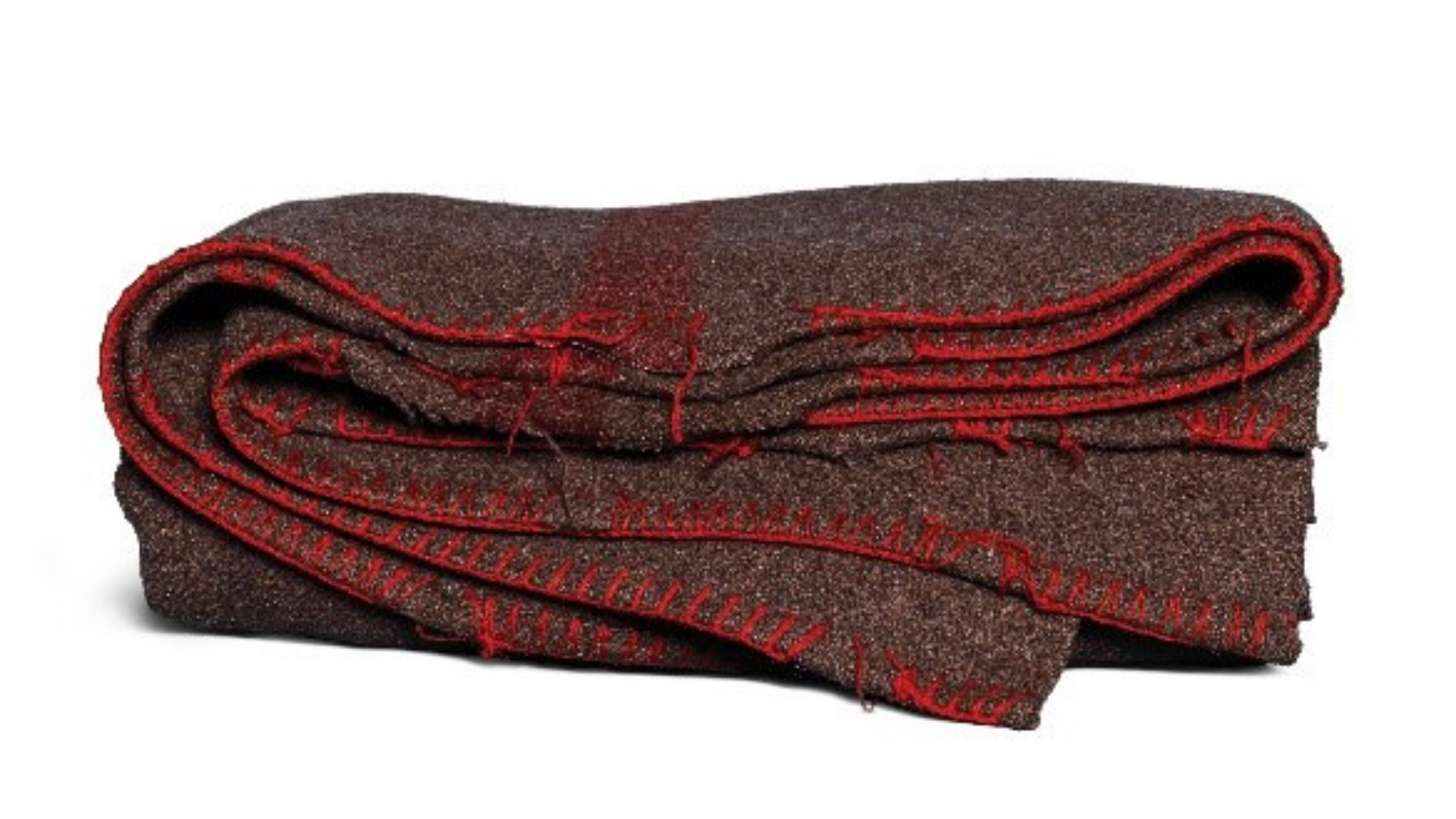 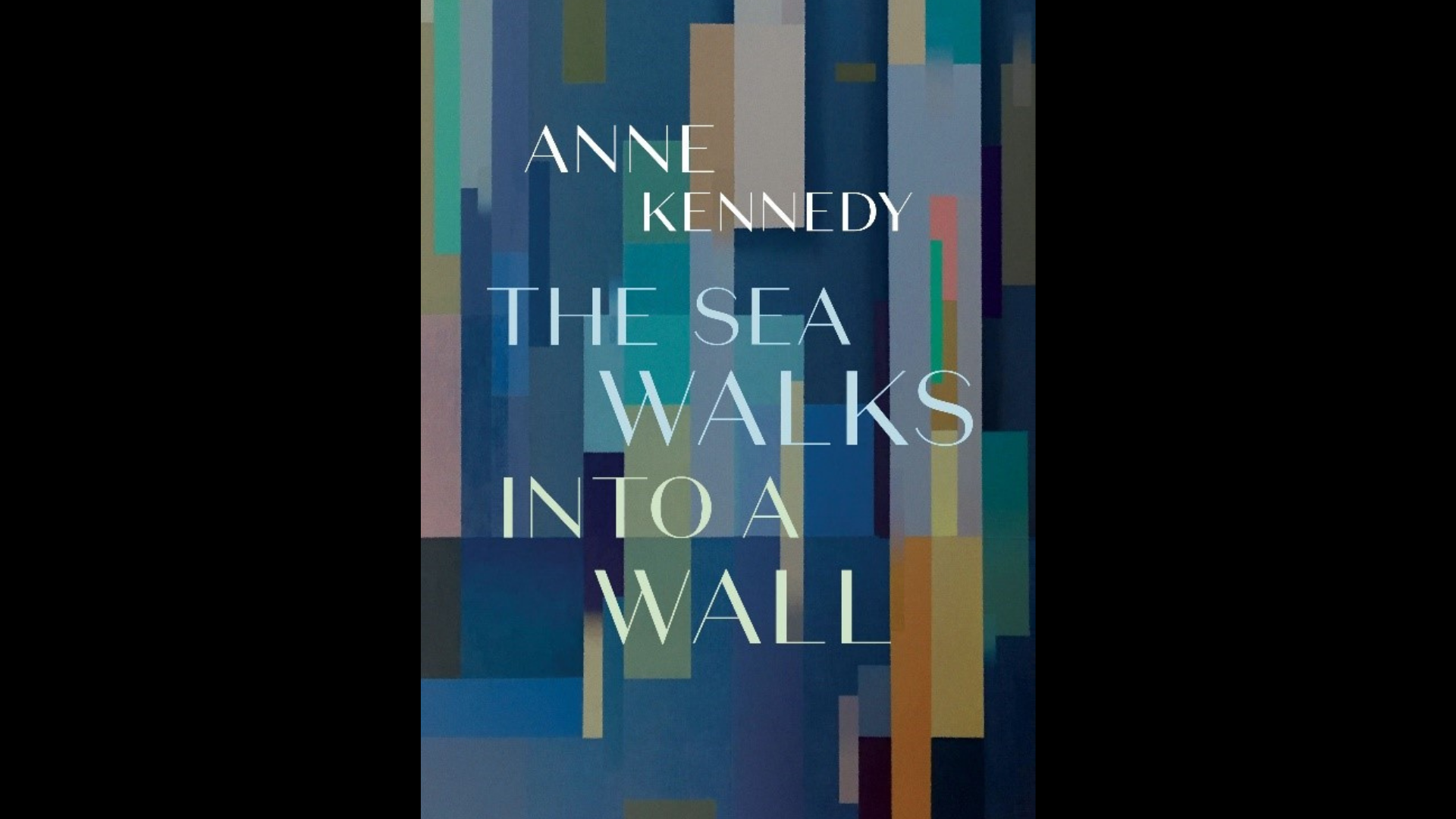 The Sea Walks Into a Wall